What To Do With The Little In Your Hands 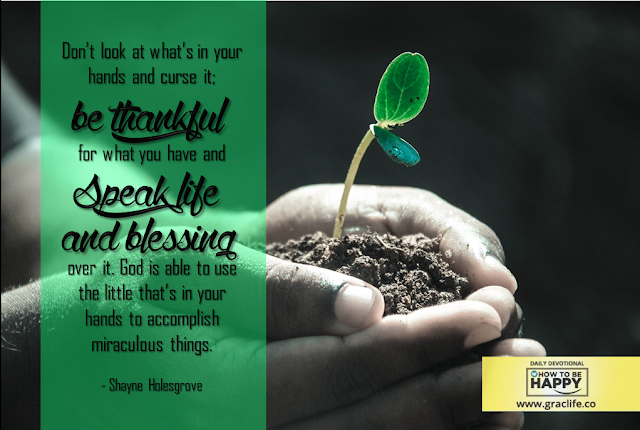 Jesus had been teaching the multitudes all day and it was now late (Mark 6:34-35). It’s recorded that there were 5000 men in this multitude – these men seem to have been more concerned with what Jesus had to say (spiritual food) than with what their stomachs were saying. This is a miracle: 5000 men didn’t consider their hunger for food! It was the disciples who came to Jesus and told Him the time, and said that they should maybe dismiss the meeting so people could go to the villages around to get food. I bet they were hungry and using the people as an excuse! Jesus responds to them with a challenge…
“But He answered and said to them, “You give them something to eat.”
And they said to Him, “Shall we go and buy two hundred denarii worth of bread and give them something to eat?”
Mark 6:37 NKJV
The disciples responded to the challenge by looking at how expensive it would be to feed the crowd. There were 5000 men; if you include the women and children there would have been between 10,000 to 15,000 people. It would have cost them about R55,000 (or US$4000) to feed this multitude. It seems that they didn’t have this kind of money available – but Jesus knew what He was doing.
“But He said to them, “How many loaves do you have? Go and see.” And when they found out they said, “Five, and two fish.”
Mark 6:38 NKJV
Jesus asked them what they had. Often we look at a task that we need to do and automatically respond by saying, “We don’t have enough!”. The task might be your budget for making dinner for your family, or your budget for a building project at work. It doesn’t really matter how many zeros there are in the budget (if you’re working with tens, thousands or millions), we often respond the same: “It’s not enough!”. We forget that “with man this is impossible, but with God all things are possible” (Matthew 19:26 ESV). Little is much in God’s hands!
“41  And when he had taken the five loaves and the two fishes, he looked up to heaven, and blessed, and brake the loaves, and gave them to his disciples to set before them; and the two fishes divided he among them all. 42  And they did all eat, and were filled. 43  And they took up twelve baskets full of the fragments, and of the fishes. 44  And they that did eat of the loaves were about five thousand men.”
Mark 6:41-44 (KJV)
How often do we look at the little in our hands and curse it? We say things like, “This isn’t going to be enough!” or “We’ll never make it with this!”. The Bible says that the power of life and death are in what we say (Proverbs 18:21).  We are often the cause of our own problems because we’re only considering what we see – and then we proceed to speak death over it, instead of reminding ourselves of the limitless supply that is in Christ and speaking life over what we see. We often look at the little in our hands and curse it (speak death) but Jesus looked at the little (the five loaves and two fish) and blessed it (spoke life). If you’re speaking death over the little you have, it’s because you are carnal: you’re only focused on what you see. Being spiritual would be seeing through the eyes of faith, the limitless supply that we have in Christ.
Don’t look at what’s in your hands and curse it; be thankful for what you have and speak life and blessing over it. God is able to use the little that’s in your hands to accomplish miraculous things. It might be feeding many people on a little budget or stretching a budget to complete a project at work, but this isn’t limited to finances. God is able to multiply your efforts as a small team to accomplish extraordinarily big things. He is able to use the little people resources, time and skill that you have to do more than you could imagine. You may feel like you don’t have enough energy, but He can multiply your strength. It all comes down to trusting God as your supply (in all areas) and not being limited by what you see (or feel).