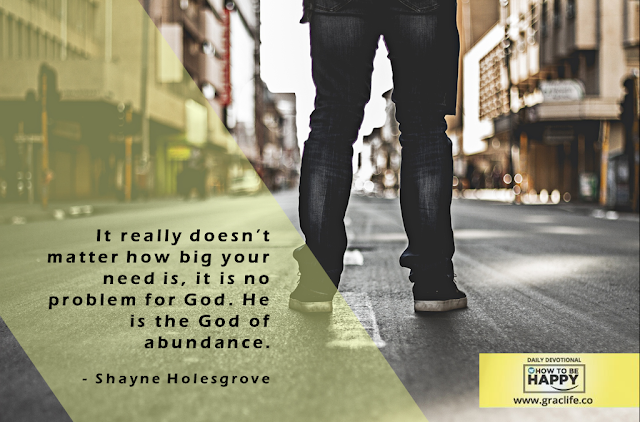 When you think of God supplying your needs, what do you picture? A lot of us limit what we see because we think according to the world’s standards. One of God’s names is El Shaddai which means ‘all-sufficient, all-bountiful God who satisfies and supplies’. God’s desire is that you have more than enough so that you can be a blessing (Genesis 12:2; 2 Corinthians 9:8). His supply always far outweighs the demand or need that we experience.
“Two days later there was a wedding in the town of Cana in Galilee, and Jesus’ mother was there. Jesus and his followers were also invited. At the wedding there was not enough wine…”
John 2:1-3 ERV
Jesus and His disciples were at a wedding with His mother, but there was a problem: there wasn’t enough wine! I love this passage of Scripture because firstly it records that Jesus was at a party (He didn’t live in His prayer closet or at the temple), and it records Jesus’ first miracle: turning water into wine. In an effort to deal with their insecurities about alcohol, some religious folk have tried to explain this away by saying that Jesus turned water into grape juice. But the Greek word used for “wine” here refers to fermented grape juice. It is also the same Greek word used for “wine” in Ephesians 5:18 which says, “…do not get drunk on wine”. You can’t get drunk on grape juice! Wine may be an important part of a celebration for some people, but it certainly isn’t a necessity. Jesus didn’t say to the wedding guests, “Hey, you don’t really need wine”! Instead Jesus provided for the party by turning water into wine.
“Now there were set there six waterpots of stone, according to the manner of purification of the Jews, containing twenty or thirty gallons apiece. Jesus said to them, “Fill the waterpots with water.” And they filled them up to the brim. And He said to them, “Draw some out now, and take it to the master of the feast.” And they took it.”
John 2:6-8 NKJV
I grew up picturing 1 litre jugs of wine; not a lot, but just enough. But if we look at how much wine Jesus actually made, it was more than enough. Each water pot contained 20 to 30 gallons of water. It’s recorded that the servants filled the waterpots to the brim (right to the top). So, let’s say that each of the six waterpots contained 30 gallons of water. 1 gallon is just less than 4 litres.  Each water pot contained about 113.6 litres, bringing it to a total of 678 litres of water which Jesus turned into wine. Keep in mind that the party is already underway and the people had probably already had enough wine. The Lord supplied more than enough wine; more than they could ever use.
The supply that we have in Christ is much greater than the lack we are experiencing. It really doesn’t matter how big your need is, it is no problem for God. He is the God of abundance.