How Much Leftovers Do You Have? 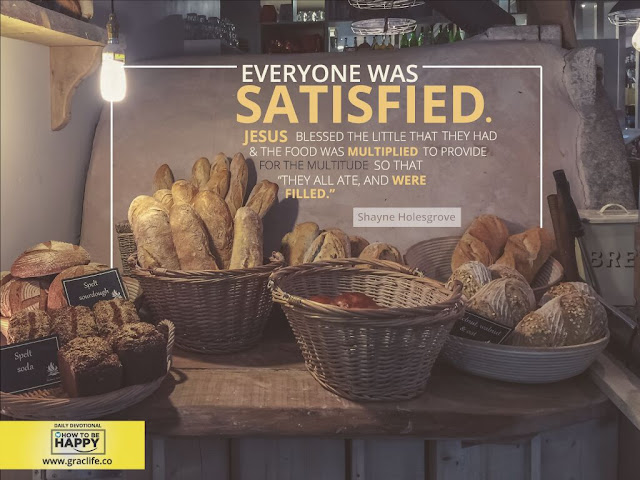 “41  And when he had taken the five loaves and the two fishes, he looked up to heaven, and blessed, and brake the loaves, and gave them to his disciples to set before them; and the two fishes divided he among them all. 42  And they did all eat, and were filled. 43  And they took up twelve baskets full of the fragments, and of the fishes. 44  And they that did eat of the loaves were about five thousand men.”
Mark 6:41-44 (KJV)
There is no way to explain this except that it was a miracle! Jesus fed 5000 men (about 15,000 people in total) with 5 loaves of bread and 2 fish. Jesus blessed the little that they had, and the food was multiplied to provide for the multitude so that “they did all eat, and were filled.” Everyone was satisfied! That means that they didn’t just each have a light snack of bread crumbs and a smidgen of fish – no! They ate their fill and that after they probably didn’t eat the whole day. We sometimes believe that God only wants to provide the basic minimum – through this belief we limit the flow of God’s supply in our lives.
God is a God of more than enough; a God of abundance. He’s not on a tight budget or worried about how to make ends meet. He’s not limited by our limitations. He can multiply 5 loaves of bread and 2 fish to feed 15,000 people so that they were all satisfied – their stomachs were full! What’s even more amazing is that there were 12 baskets full of left overs. Jesus didn’t just meet the need. This is God’s standard of provision and abundance: more than enough to accomplish what needs to be accomplished. With leftovers!
“7  And they had a few small fishes: and he blessed, and commanded to set them also before them. 8  So they did eat, and were filled: and they took up of the broken meat that was left seven baskets. 9  And they that had eaten were about four thousand: and he sent them away.”
Mark 8:7-9 (KJV),
On another occasion Jesus fed 4000 people with a few small fish. Once again He blessed what they had, and the little became much – it became more than enough to accomplish the task of feeding the multitude. On this occasion there were seven baskets of leftovers.
“And God is able to make all grace abound toward you; that ye, always having all sufficiency in all things, may abound to every good work”
2 Corinthians 9:8 (KJV)
God’s doesn’t just want to meet your needs; He doesn’t want to provide the bare essentials for you. God wants to make all grace (undeserved favour) abound (be generous) toward you. He doesn’t delight in you just getting by; He wants you to have more than enough so that you’re providing well for your family and so that you have a couple baskets full of leftovers so that you may abound (be generous) towards every good work. He wants to bless you so that you can be a blessing!