GET READY FOR VICTORY! 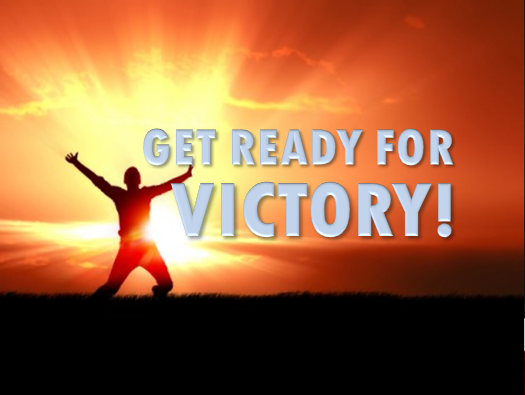 “Then he took his staff in his hand; and he chose for himself five smooth stones from the brook, and put them in a shepherd’s bag, in a pouch which he had, and his sling was in his hand. And he drew near to the Philistine.”
1 Samuel 17:40 (NKJV)
David fought his battle against Goliath the way he knew how to. King Saul had tried to get David to us his armour and sword, but David wasn’t familiar with it and stuck with what had worked for him in the past. He wasn’t trusting in armour, or a sword, or even his slingshot; David was trusting in his relationship with God for success.
He selected five stones, put them in his shepherd’s bag, and then approached Goliath. The Israeli soldiers were passively waiting in their camp; they were full of fear and no one had any inclination to fight. David was actively resisting his enemy; he didn’t wait for things to get worse. We don’t know for sure why David chose five stones to go into battle with. Goliath may have had four brothers which David was ready to defeat after he got rid of Goliath. This would reveal David’s confidence and vision of victory. He wasn’t hoping to win – he knew he was going to win because God was on his side! Maybe he chose five stones so that if he missed the first time he had another four chances? This would reveal a determination to fight the giant as long as it took. David had no guarantee that it would be a short battle, but he was prepared and determined to go for it. He had a vision of victory and was going to get it.
“Submit yourselves therefore to God. Resist the devil, and he will flee from you.”
James 4:7 (KJV)
We will never experience victory and reign in life if we passively wait for it to happen. Victory never happens by accident, and it’s not something that happens automatically. You have a part to play in overcoming and experiencing victory; you need to resist the devil and his attacks. But don’t fall into the trap of focusing on the attack and on the enemy. Victory is yours – you’re fighting from victory not for victory! As you keep focused on Jesus, faith will rise in your heart to run (and fight) with patience and persevere.
“8 Be sober, be vigilant; because your adversary the devil walks about like a roaring lion, seeking whom he may devour. 9 Resist him, steadfast in the faith…”
1 Peter 5:8-9 (NKJV)
Thought to focus on for the day:
Victory is yours but don’t sit and wait for it – when your enemy attacks, resist him and stand firm in your faith (reliance on God). Have a vision of your victory – see it in your heart – and go get it! No matter how long the battle may be, persevere and don’t give up. God is on your side and you are assured victory. If you have not seen the victory yet, don’t give up. It simply means that the battle isn’t over yet.