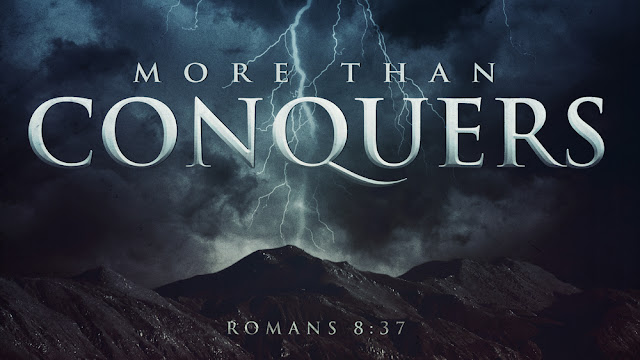 Is there an area of your life that needs conquering? Do you have a challenging situation that you need to overcome? Are there some difficult circumstances (or even people) that surround you, and it seems like there is no hope or that it’ll take a miracle for things to turn around? The Bible says to cast your cares on Jesus, because He cares for you! (1 Peter 5:7) That means that you can take whatever is troubling you or making you anxious and you can cast it (throw it with force) to the Lord because He loves you. He wants to carry your burden – it’s His job, not yours! He is your Shepherd (Psalm 23) and wants to care for you.

Romans 8:37 (KJV) “Nay, in all these things we are more than conquerors through him that loved us.”

“More than a conqueror” means that you get all the rewards of the battle without having to go to the battle! It’s like a boxer who fights round after round, pushing himself physically to the max. Eventually he throws a knockout punch and his opponent falls to the ground. The referee steps into the ring, raises his hand in the air and declares him the world champion and conqueror! He gets the shiny belt and big cheque as his reward, then goes home where his wife claims the cheque! She is “more than a conqueror”! She gets all the reward with none of the battle, simply because of her relationship with her husband. You and I are “more than conquerors” and get all the rewards of what Christ accomplished through His death and resurrection without us having to fight for it. We partake in the rewards simply because of our relationship with Christ, not our effort.

1 Corinthians 15:5(KJV)“But thanks be to God, which giveth us the victory through our Lord Jesus Christ.”

God gives us the victory we don’t have to fight for it. As a believer you don’t fight for victory, you fight from victory! The moment you receive Jesus you are “born-again” into victory. You are not fighting for victory but fighting to defend your victory.

One of the keys to experiencing victory in your life is found in Romans 8:37, and that is to focus on His love for you. The reason we are “more than conquerors” is because of Jesus’ love for us. The reason He came is because of His great love for us (John 3:16; Ephesians 2:4). Faith is the key to experiencing this victory but focusing on His great love for you is what gets that faith active (Galatians 5:6).

No matter what you’re facing, focus on Jesus’ great love for you and see yourself as God sees you: more than a conqueror because you are in Christ!