Choosing to walk in your destiny. 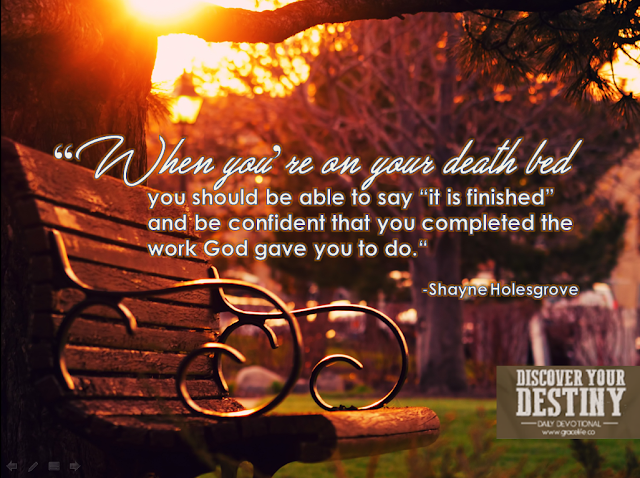 “The Lord is not slack concerning his promise, as some count slackness; but is longsuffering to you-ward, not wishing that any should perish, but that all should come to repentance.”
2 Peter 3:9 ASV
A lot of people believe that if God wills it, it will happen – but that simply is not true. God wills that no one perish but that all should be saved. And yet, people perish every day. God’s will doesn’t automatically come to pass because He’s given us the responsibility of a free will.
“If you confess that Jesus is Lord and believe that God raised him from death, you will be saved. For it is by our faith that we are put right with God; it is by our confession that we are saved.”
Romans 10:9-10 GNB
God wants every person to be saved; Jesus came and dealt with the sins of every person that would ever live (1 John 2:2). He’s not excluding anyone from receiving salvation; but salvation has to be received. If you don’t confess that Jesus is Lord and you don’t believe that God raised Him from the dead, you won’t be saved. Jesus said that He came so that “anyone who believes wouldn’t perish but have eternal life” (John 3:16). You have to believe and receive in order to be saved and not perish – it doesn’t happen simply because God wills it.
Likewise, you aren’t going to live in your destiny accidently. Many people have this fatalistic mind-set that if it’s meant to be it will happen, and that there’s little that you can do to change it – but that’s not true. Everyone is meant to be saved, but many aren’t (Matthew 7:13). To hit something you need to aim at it! They say that the place with the greatest potential in the world is the graveyard; this is because most men and women die full and not empty. They die not having used their gifts and talents, or not having followed their God-given passions. We need to live to give so that we can die empty. The gifts that God gives you are not for you to keep, but for you to give and use to be a blessing to others. When you’re on your death bed you should be able to say “it is finished” and be confident that you completed the work God gave you to do.
“I don’t care about my own life. The most important thing is that I finish my work. I want to finish the work that the Lord Jesus gave me to do–to tell people the Good News about God’s grace.”
Acts 20:24 ERV
Paul took responsibility for completing his assignment on earth. He didn’t have a fatalistic attitude that everything would just happen because it was meant to be. God gave him the assignment, and God empowered Him to do it (Acts 1:8; 1 Corinthians 3:9) but Paul accepted responsibility to do it. God’s purposes for your live don’t automatically come to pass. If you want to walk in your destiny and fulfil His purpose for your life you need to co-operate with Him. You need to discover His plans for you, and then you need to choose to walk in it.