South African Elections 2016 – Are you voting?

They say you should never talk about politics in church. I could never understand that because it’s such a huge part of life and as believers it is our opportunity to have our voice heard. I don’t believe that real change will come through government – God has commissioned real change through the ministry of the Gospel by the church. But the church (believers) needs to go into all areas of life (including politics and government) and bring God’s influence there. As a pastor and leader it is important that I do my part to help educate people on how their vote as a Christian, matters.
Christian, it’s your duty to vote. It’s also your opportunity to make your voice heard. We’re given an opportunity to let our voice be heard, by voting, and give men and women the privilege of representing us and making laws and making decisions that reflect our beliefs. Your vote reflects your values and so before you vote you need to make sure that you know the values of the party that you are supporting.
Our faith as believers needs to make an impact in all arenas of life including politics and government. I was involved in politics for a number of years before going into full-time ministry, and know how things work and can tell you lots of stories from “behind-the-scenes.” You can be a Christian and a politician and be in any political party. But if your faith and the Word of God is not your foundation and guide, and if it does not influence your decisions and policies then you are just playing games and you are not truly fulfilling your God-given destiny to make an impact for Him.
We have a system of government where every vote counts because of proportional representation. Don’t believe the lie that we need a stronger opposition or a “don’t divide the opposition”. If you know anything about the past couple of years of our history, you’d know that many opposition parties have stood together to form a coalition governments and bring about change together. And smaller parties are making a difference! Every vote counts and your vote reflects your beliefs. Don’t vote out of fear or ignorance; get the facts and vote for a party which will stand for you.
I know of a case in certain municipality where a very popular opposition party put forward a proposal to force a church to close its doors and move. I was sitting in the public gallery of this meeting. The main reason for their proposal was public disturbance – a few of their members had lodged complaints about traffic congestion and many people gathering in the area. One of the representatives of that party who is a Christian expressed to a friend of mine that they were in a moral-conflict because their daughter goes to that church and it is doing such a great work, but this representative had no voice in the matter because the party had decided. I do not know what the outcome was – I don’t think that the church was closed-down or forced to move, but the story should be a wake-up call for us as Christians.
Take time to find out about the different parties. Contact those who are standing for council in your area and ask them a few questions about their values and how they plan to represent your faith and values in government. Pray about it and ask God to lead you.
I know a number of Godly men and women in government personally, and can vouch for them. I had the privilege of working alongside some of these men and women as an administrative support in parliament a few years back. I also know a few men and women in local government who are doing great things! These men and women are making an impact for Jesus in our government and are defending the church and our rights, so that we can do the work God has called us to.
I encourage you to do your homework and vote according to your values. I am not telling you who to vote for, but I will tell you who I support. I whole-heartedly support the African Christian Democratic Party (ACDP). They have faithfully stood for Biblical values since 1994 and have a proven track record. I honour the men and women in the ACDP and all that they do for our nation. You may be saying, “but I don’t know anything about the ACDP!” And that’s probably because they don’t get the support they need and thus don’t have budgets like the bigger parties do. Here is a copy of their 2016 local government manifesto, I encourage you to take a look at it and consider supporting them. Click here for their manifesto.
If you don’t agree with me please don’t allow that to divide us. You’re still welcome at our church and we can still be friends. Don’t allow politics to divide the church. Again, I believe that we need to be involved in government through voting and standing as candidates (if you feel called into that) but what will bring about real change is if the church wakes up, preaches the true Gospel, and make true disciples. Selah. 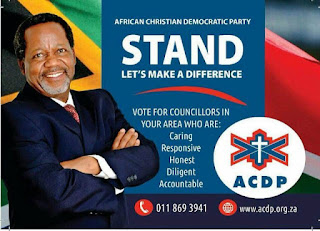