GO TO THE OTHER SIDE 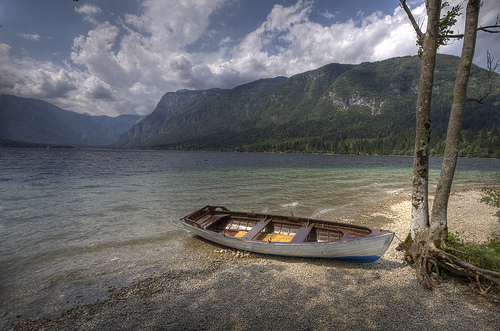 “On the same day, when evening had come, He said to them, “Let us cross over to the other side.” 36 Now when they had left the multitude, they took Him along in the boat as He was. And other little boats were also with Him. 37 And a great windstorm arose, and the waves beat into the boat, so that it was already filling. 38 But He was in the stern, asleep on a pillow. And they awoke Him and said to Him, “Teacher, do You not care that we are perishing?” 39 Then He arose and rebuked the wind, and said to the sea, “Peace, be still!” And the wind ceased and there was a great calm. 40 But He said to them, “Why are you so fearful? How is it that you have no faith?” 41 And they feared exceedingly, and said to one another, “Who can this be, that even the wind and the sea obey Him!”
Mark 4:35-41 (NKJV)
No matter how bad the storm may be, Jesus is with you! If you stay focused on the storm, your heart will fill up with fear and you’ll struggle to overcome what you’re facing. But as you focus on Jesus and His Word, faith will rise up in your heart (Isaiah 26:3-4) and you will experience supernatural peace which will enable you to effortlessly overcome because you’re resting in the Lord (Psalm 116:7). Your greatest enemy is not the storm. Your greatest enemy is fear.
“On the same day, when evening had come, He said to them, “Let us cross over to the other side.”
Mark 4:35 (NKJV)
Scripture records this account of getting into the boat and going into a storm as on the same day as Jesus teaching His disciples about the Kingdom of God, and how God’s Word is a seed which we need to receive and cultivate in our hearts. The storm was their first opportunity to put into practice what they were learning. Jesus’ word to them was: “Let us cross over to the other side.”
Do you have a Word from God? You know you are where you should be, or you know that you’re doing what you should be doing, and yet everything seems to be going against what should be? It may be natural elements that you’re experiencing (storms happen – maybe you’re experiencing the effects of a bad economy?), it may be persecution (which is resistance from other people because of your convictions – 2 Timothy 3:12) or it may simply be the enemy (who doesn’t want you to fulfil your destiny and prosper – 1 Peter 5:8). Whatever the reason for the storm you are facing, the truth is that if you have a word from God and you are where He has called you to be, then you need to hold onto that Word.
Jesus’ word to them was “Let us cross over to the other side.” He didn’t say “let’s go halfway and drown!”. Life isn’t always a walk in the park. Jesus told us that we’d have troubles in this life (John 16:33) – but because He has overcome, we can overcome, and experience supernatural peace all the way! The disciples were focused on the storm – the natural elements and circumstances – and they allowed their hearts to be troubled, and full of fear, because of the storm. It is easy to panic if you focus on the problems and they can overwhelm you, but you need to choose to focus on Jesus and His Word. The disciples may have never woken Jesus if they had thought about the truth that Jesus is God (the Creator of the universe) and that He had given them a word: go to the other side. If they had remembered this, they would have put faith in His word (and not in the storm) and then they would have gotten through the storm to the other side. All while Jesus was still enjoying his nap.
“Keep in mind that the LORD your God is [the only] God. He is a faithful God, who keeps his promise and is merciful to thousands of generations of those who love him and obey his commands.”
Deuteronomy 7:9 (GOD’S WORD)

“So shall my word be that goes out from my mouth; it shall not return to me empty, but it shall accomplish that which I purpose, and shall succeed in the thing for which I sent it.”
Isaiah 55:11 (ESV)

The disciples had a promise from Jesus. Fulfilling that promises was Jesus’ responsibility, but the disciples’ responsibility was to hold onto that promise and keep trusting Him. You may feel like you’re going through “the valley of the shadow of death” (and that can be very scary if you’re not focused on the Lord), but remember that you’re going through the valley of the shadow of death (Psalm 23:4). You’re not camping there; you’re simply passing through.
Thought to focus on for the day:
Don’t focus on the storms you’re facing – focus on Jesus and His promises to you. He didn’t call you to trust Him so that you could be the first person to ever see Him fail. His is faithful and His promises are true. Don’t be moved by circumstances; be moved by God’s Word.