YOU CAN BE BOLD BECAUSE YOU KNOW GOD 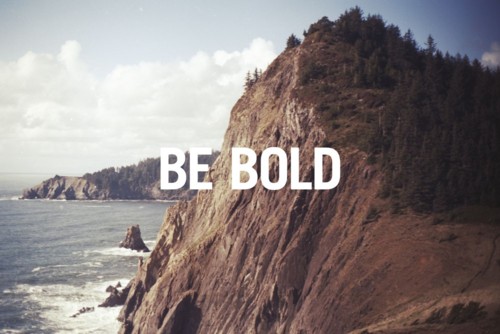 “31 Now when the words which David spoke were heard, they reported them to Saul; and he sent for him. 32 Then David said to Saul, “Let no man’s heart fail because of him; your servant will go and fight with this Philistine.”
1 Samuel 17:31-32 (NKJV)

David was on the battlefield simply because his father had instructed him to bring his brothers and their fellow-soldiers some lunch. He came on the scene to find that the king and all the soldiers were paralysed with fear; they were all so consumed with the giant (Goliath) who was up against them that they had forgotten that they had a covenant with God and were guaranteed victory. David wasn’t a soldier. He was a young shepherd boy. From the description of him in Scripture we see that he was a pretty boy – he wasn’t rough and tough but small and soft. But when David arrived on the battlefield he was the only one who had confidence (faith) in God and His promises. The giant was big and scary, but David didn’t focus on him. Instead, he boldly declared God’s promises and chose to focus on them.
Eventually, news of David’s boldness reached Kind Saul (who was hiding in his tent). The King summoned David and as soon as David walked into the presence of King Saul, he declared his faith, saying, “Let no man’s heart fail because of the giant; your servant will go and fight with this Philistine.” Usually, if you come into the presence of the king you would only speak in response to what the king said. This would show respect. But David didn’t give King Saul an opportunity to infect him with his fear and unbelief. Before he could say anything, David declared his faith with boldness. When you face a giant, you need to guard your heart by focusing on God’s promises. Don’t allow those around you to speak fear and unbelief into your heart and mind. Rather, boldly declare what God has said.
“33 And Saul said to David, “You are not able to go against this Philistine to fight with him; for you are a youth, and he a man of war from his youth.”
1 Samuel 17:33 (NKJV)
All King Saul saw was a young pretty boy with a big mouth. He wasn’t listening to or thinking about what David was saying. If he did, maybe he would have started focusing on the promises of God and the truth that they were God’s chosen people. Instead, Saul discouraged David with his own fear and unbelief, by focusing on the facts and what he saw: “You can’t do it! You’re just a little boy and this giant is a really skilled soldier – he’s been doing this all his life! You don’t stand a chance.” When you’re facing a giant, people will come and tell you how bad the situation really is. They’ll tell you about how that giant destroyed someone they knew. They will speak their fear and unbelief, even if you didn’t ask them to. Look at how David responded when this happened to him; he started off by testifying of his past victories.
“34 But David said to Saul, “Your servant used to keep his father’s sheep, and when a lion or a bear came and took a lamb out of the flock, 35 I went out after it and struck it, and delivered the lamb from its mouth; and when it arose against me, I caught it by its beard, and struck and killed it.”
1 Samuel 17:34-35 (NKJV)
David had never faced a giant before, but he had protected his father’s sheep by killing off a lion and a bear. He may not have been “a man of war from his youth” like the giant, but he sure had guts (he was bold and courageous!).
“36 Your servant has killed both lion and bear; and this uncircumcised Philistine will be like one of them, seeing he has defied the armies of the living God.”
1 Samuel 17:36 (NKJV)
David didn’t allow Saul’s fear and unbelief to get to him. He chose to have faith in God, not in the natural circumstances. He boldly reminded the King that the giant was nothing more than “an uncircumcised Philistine” – Goliath had no covenant with God. I can imagine David getting hopping-mad. Sometimes we need to get hopping-mad at the giants which seek to steal our Divine inheritance from us. We shouldn’t tolerate even the smallest “giant” because if we do, it will grow! The Message Bible puts David as saying, “And I’ll do the same to this Philistine pig who is taunting the troops of God-Alive.” You cannot defeat your giant by being polite and timid. James 4:7 says that when we resist the devil, he will flee from us. The word resist means to “actively fight against.” Are you actively fighting against the devil (who is the source of all giants) or are you managing him, tolerating him and passively putting up with him? David was angry because this uncircumcised Philistine had no right to stand against the armies of God and terrorize them. Whatever giants are against you (sickness, disease, lack, depression, discouragement…), they have no right in your life. You belong to God (1 Corinthians 6:20)!
“37 Moreover David said, “The Lord, who delivered me from the paw of the lion and from the paw of the bear, He will deliver me from the hand of this Philistine.”
1 Samuel 17:37 (NKJV)
David’s confidence wasn’t in himself – he wasn’t focused on himself and what he could or could not do – he was drawing strength and courage from his relationship with God. He was relying on and trusting in God.
Thought to focus on for the day:
You belong to God, therefore no giant has any right to terrorize you. Don’t allow the unbelief or fear of anyone to get to your heart – speak out God’s Word with boldness and confidence knowing that victory is yours because God is on your side!